The text of the announcement and a copy of it can be found below. 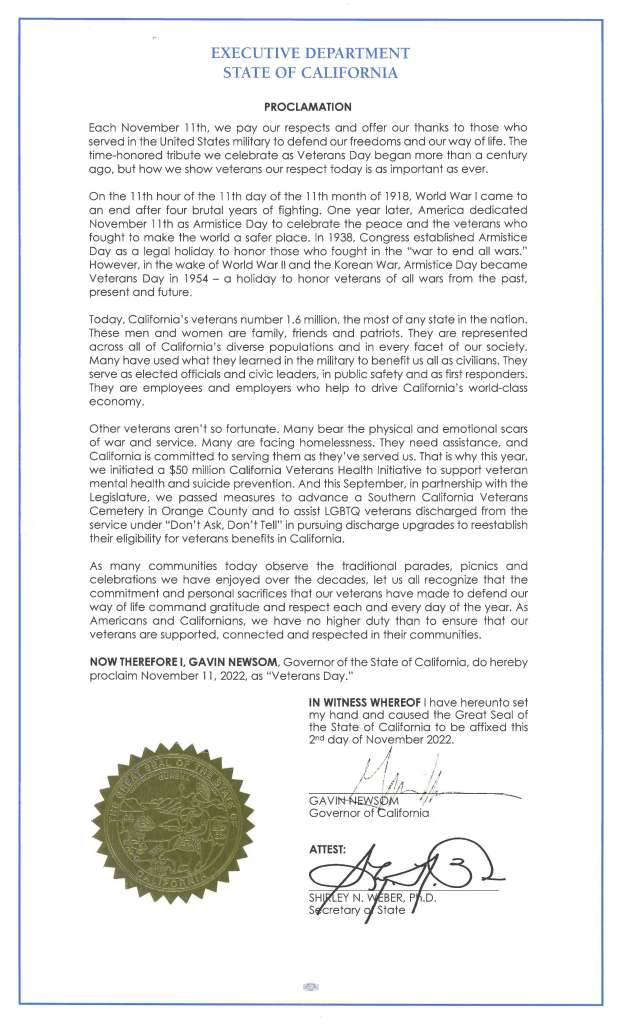 Every November 11th, we pay our respects and thank those who serve in the United States military to protect our freedom and our way of life. The time-honored tribute we celebrate as Veterans Day began more than a century ago, but how we show respect to veterans today is as important as ever.

At the 11th hour of the 11th day of the 11th month of 1918, World War I ended after four brutal years of fighting. A year later, America dedicated November 11th as Armistice Day to celebrate the peace of veterans who fought to make the world a safer place. In 1938, Congress established Armistice Day as a legal holiday to honor those who fought in the “war to end all wars.” However, in the wake of World War II and the Korean War, Armistice Day became Veterans Day in 1954—a holiday honoring veterans of all wars past, present, and future.

Today, California has 1.6 million veterans, the most of any state in the country. These men and women are family, friends and patriots. They are represented in California’s diverse population and in every aspect of our society. Many have used what they learned in the military to benefit us all as civilians. They serve as elected officials and civic leaders, in public safety and as first responders. They are the employees and employers who help drive California’s world-class economy.

Also Read :  Qatar loses opener, US up on Day 2

Other veterans are not so lucky. Many bear the physical and emotional scars of war and service. Many people are facing homelessness. They need help, and California is committed to serving them as they have served us. That’s why this year, we launched the $50 million California Veterans Health Initiative to address veteran mental health and suicide prevention. And this September, in partnership with the Legislature, we passed measures to help expand the Southern California Veterans Cemetery in Orange County and pursue discharge upgrades to rehabilitate LGBTQ veterans discharged from service under “Don’t Ask, Don’t Tell.” Their eligibility for veterans’ benefits in California.

As many communities today observe the traditional parades, picnics, and celebrations that we have enjoyed for decades, let us all recognize that each day we express gratitude and respect for the commitment and personal sacrifices our veterans have made to preserve our way of life. As Americans and residents of California, we have no higher duty than to ensure that our veterans are supported, connected and honored in their communities.